The first thing to look for is the golden spot that 99% of the time will be apparent after capture although after the fish dies, It can in some cases, disappear. The second best thing is to check it has no lower lip teeth that the thin lipped mullet does. They are usually caught in 100% salt water where as the thin lipped mullet can be caught in brackish or fresh water.

The Thick Lipped is probably the easiest to identify. By looking at its mouth you can see a rather prominent upper lip especially when compared to the other mullet. The picture below shows a close up of its mouth. 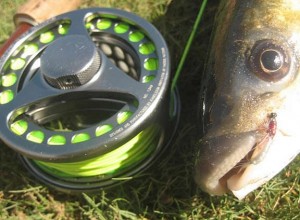 The thin lipped is often confused with the Golden Grey Mullet when caught in the sea, especially as the Golden Grey sometimes loses it golden spot after being caught, rather quickly. The body shape is slightly different on a Thin Lipped Mullet, being more elongated and streamline. It also has small teeth on its lower lip which a Golden Grey does not and is probably the safest way to make sure it is not a Golden Grey and is a Thin Lipped. 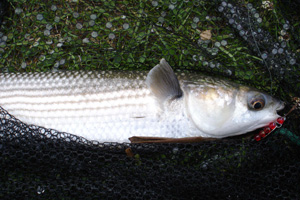