The rays are not too hard to tell apart… if you’ve seen a picture of one before that is. The colouration of the Small Eyed Ray shows light bands running in parallel with the edge of its wings and lighter blotches over its back, They are more often than not a pale sandy colour. It also has a row of about 50 spines down its back until its first dorsal fin. It also, as its name suggest has rather small eyes compared to other rays. However by looking at a picture you will be able to identify a Small Eyed Ray should you catch one. It should also be noted that they are the most common ray along LRSAC’s stretch of club waters and usually arrive early April and disappear by the end of the summer. 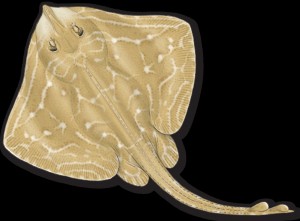 The Thornback has dark/light bands along its tail, in general, as the name suggests, has more thorns over its body and they are normally a lot darker than the SE, Spotted and Blonde Rays. The pattern is usually random blotches over its body and two ”eyes” are apparent in the middle of its wings. They are not as common as the SE and can be caught almost all year round. 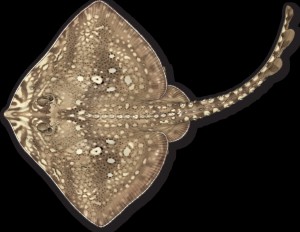 It is difficult to get confused with any others. Sometimes they can look similar to a Thornback but it’s colouration include white spots surrounded in loops and swirls rather than just in blotches like the Thornback. They also have a rounder shape to the wings than the Thornback Ray. The Undulate Ray are probably the rarest of the Rays in Devon and Dorset but however, are still caught mid to late summer. 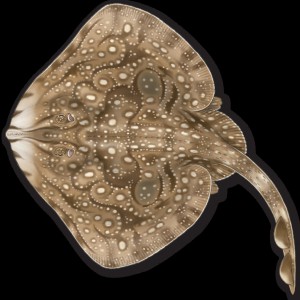 The Spotted Ray can be confused with small Blonde Rays, the spotted does not grow very big and a 5lb fish would be considered very good. The Blonde Ray however can grow well in excess of 20lb. However there is one key feature to look for one these rays and that is the spots. On a spotted the spots are larger compared to its size and more importantly DO NOT reach the edge of its wings, leaving a small border. The Blonde however, has smaller spots that go right to the edge of the wings. 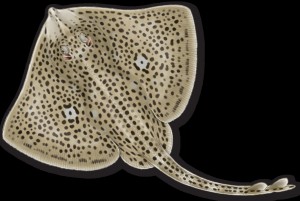 The Blonde ray, as with the Spotted are the two main confusions. By looking at the spots as said above, it is fairly simple to ID the Ray. 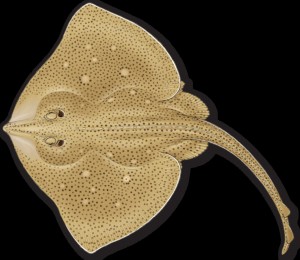