Do you know your wrasses?

Corkwing wrasse are very commonly mistaken for ballan wrasse. However, they are in most places, the dominant species of wrasse. There are three ways of identification.

1) The first is by looking for a black crest behind it eyes like in the picture below. This is probably the safest bet for a correct identification.

2) The second is a little harder to spot and is by running your finger down along the gill plate and if it feels rough, this will confirm it is a Corkwing wrasse although the less common Ballion’s Wrasse also has this feature.

3) The final method is by locating a black spot just before it Caudal fin (Tail Fin) about midway up its body, shown in the picture below. It must be noted not all Corkwing wrasse have this feature. You can also see the colour difference between male (above) and females (below). 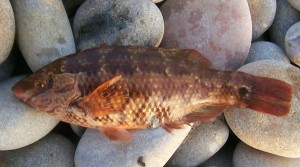 Not alot needs to be said about this species of wrasse as it is fairly easy to distinguish. It will usually be a paler colour but more a more certain identification can be gained by looking for two black spots. One is located at the start of the dorsal fin and the other just before the caudal fin (tail fin) but unlike the spot being in the middle like the Corkwing above, it is located at the top of the body. The final telltale sign it is a Goldsinny is its body shape, usually being a lot thinner that the other species of wrasse.

This species of wrasse was only actually officially recognised as a distinctive species in the last decade. It is the rarest of the wrasse and can be identified a couple of ways. Its colouration is almost identical to that of a Corkwing wrasse and also shares the same sort of serrated gill plate. The distinctive feature however is the bright red outlines to all its fins shown in the picture below (note similar body colour to the Corkwing). 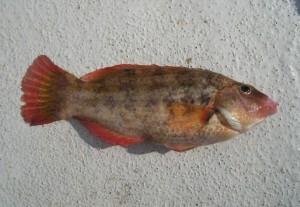 The picture below shows its serrated gill plate if you look closely. 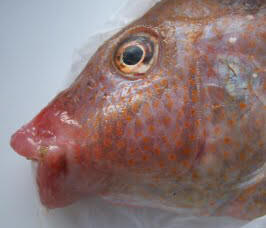 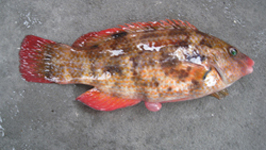 The Ballan Wrasse simply cannot be identified by colour as they vary so much from green, gold and blues such as in the pictures below. It is the largest wrasse so if one of 1lb or more is caught it is usually safe to say its a Ballan. The best way to identify them is to look for features in the other wrasse such as the Corkwing and the it’s black crest, the Baillion’s red fins and the Rock Cooks body shape and black stripe. If these are not present it’s safe to say it is a ballan wrasse.

This one is green! 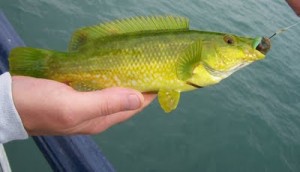 And this one is orange! 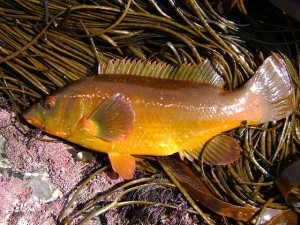 Quite a distinctive Wrasse but one people do not normally look out for, less common in Dorset and only grow to around 15cm. The fish has a rounder body than any other fish and has a black stripe that runs down the body just before the caudal fin (tail fin) shown in both pictures. The picture belowt shows the female sometime confused with the Corkwing.

This is the more distinctive male. 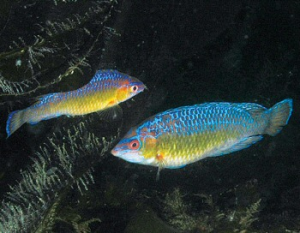